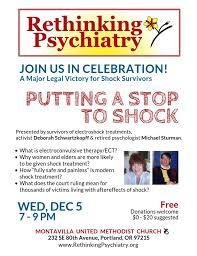 Join host Paul Roland and his guest by phone Michael Sturman as they talk about the landmark anti-electroshock lawsuit settled recently in California in favor of injured ECT (Electro-Convulsive Therapy) patients. As leading anti-psychiatric abuse advocate Peter Breggin explains in this article, the lawsuit paves the way for further lawsuits against ECT device manufacturers. Breggin was an expert medical witness in the case. Also on the program will be Rethinking Psychiatry member David Potter, joining Paul in the KBOO studio.

At sixteen, Sturman  was committed to a state hospital in Michigan and forced to undergo between 20-30 old-fashioned bilateral electroshock where the muscle relaxant was given without putting him to sleep. The muscle relaxant (Anectine was used at that time) paralyzes all muscles, including the diaphragm which controls respiration.  He experienced an excruciating level of pain and fears of dying.  Subsequently, he became very fearful of any repetition of the experience, and painful everyday thoughts and painful dream about what occurred.

Prior to the "treatments," Sturman had been a high-functioning honor student.  When he returned to school he struggled to maintain his grades, as well as having difficulties paying attention, finding words to say simple things, and with written English. He thinks all stemmed from the brain damage associated with ECT.  Nevertheless, he went on to obtain a Bachelor's and Master's degree in Psychology, and to practice in clinical settings for over 30 years.  During that time he was afraid to openly discuss his experience with anyone, fearing it might have repercussions at work or in his social life.  Now that he's am retired, he feels he has much less to lose, and wants to contribute to justice being done.

Rethinking Psychiatry, a Portland-based educational activist group and community for people who want to see a better mental health care system and real alternatives. They are an all volunteer organization made up of people with lived experience, professionals, family members, and other allies. Their event, "Putting a Stop to Shock: A Major Legal Victory," is this Wednesday, December 5 at  7  p.m. at the Montavilla United Methodist Church, 232 SE 80th Avenue.

Update Required To play the media you will need to either update your browser to a recent version or update your Flash plugin.
Download audio file
Topic tags:
Activism, Civil Rights/Human Rights, Corporations, Health, Law/Court/Crime