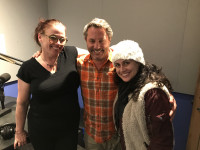 On tonight's Holy Crowley Hour, we totally ignore Thanksgiving and celebrate a great local podcast, The Diarist, a multi-episode, serialized podcast set in 1950s New York City. The lead character, Andrea Davies, is a young secretary described in the first episode as “a fish surrounded by sharks”.

In the words of one reviewer, “The Diarist is what you get if Mad Men and Jane Eyre marry and have a baby, where a secretary becomes the personal assistant to a prickly and strange ad executive and falls in love.” Another reviewer said the podcast is if "Alfred Hitchcock decided to write a love story”.

Our guests are the creative team behind the series -- creator/producer/co-director Donna Barrow-Green. actress/co-producer/co-director Beth Ricketson, and lead actor/co-producer Ryan Bowen. We’ll talk about audio podcasts and The Diarist first, especially in light of the #MeToo movement, and then play Episode One for you, in its entirety.

And we'll do all that before the clock strikes midnight, when a prickly and strange Joe Woods arrives to take us all off to Far Away Places.