Kids and Teens Sue the Government Over Climate Change 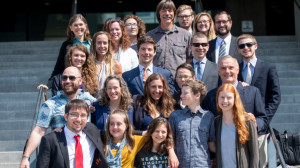 Jan Haaken talks with Franklin High School senior and activist Annika Mayne about Juliana vs. United States, a law suit that was supposed to begin in a US District Court on October 29th. In it, the plantiffs (young people from Oregon) charged the federal government with abdicating responsibility for doing something meaningful about climate change. The Trump Administration has filed a motion with the Supreme Court to put a halt on the suit before it could begin, with some saying that the suit's premise that we have a right to a habitable planet is itself indefensible. They consider the case and talk about a support rally at Terry Shrunk Plaza 10/29. Information about other rallies around the country can be found at Youth v. Gov.

Update Required To play the media you will need to either update your browser to a recent version or update your Flash plugin.
Download audio file
Topic tags:
Activism, Civil Rights/Human Rights, Environment/Climate, Law/Court/Crime, Youth