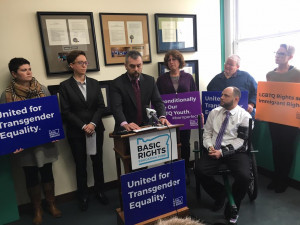 Basic Rights Oregon hosted a press conference in response to the Trans Memo from the Trump Administration. The memo outlines a proposal to federally define gender as only male or female and determined at birth.

The proposal outlined in the memo will not impact Oregon state legislation, such as the Oregon Equality Act of 2007. Critics call it a fearmongering tactic before the midterm elections. Should the proposal take effect, it will likely hit education and healthcare first.

Update Required To play the media you will need to either update your browser to a recent version or update your Flash plugin.
Download audio file
Topic tags:
Civil Rights/Human Rights, Gender, Government/Politics, Evening News