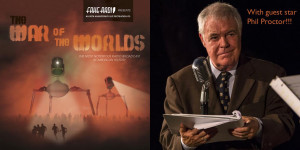 Carl Crowley and I are big fans of radio comedy. And tonight we have the very best -- Phil Proctor and David Ossman of the Firesign Theatre. Phil is joining us live in studio, after performing earlier in the evening in the Fake Radio production of War of the Worlds. And David will be calling in from his home somewhere off the coast of Washington state. We also welcome David Koff, artistic director of Fake Radio; Sam Mowry, artistic director of Willamette Radio Workshop, who is taking on the Orson Welles role in the production; and screenwriter and actor Jonathan Stark, a Fake Radio mainstay who plays the mysterious stranger in War of the Worlds.

We'll be celebrating the 80th anniversary of the original War of the Worlds radio broadcast, talking about Phil and David's recent books, and whatever else comes up in the course of what's sure to be a rollicking 60 minutes. As the clock strikes midnight, Joe Woods drops by for Far Away Places, beaming soothing lounge music to our Martian listeners so they'll stay put. Hey, that's why it's called Far Away Places.