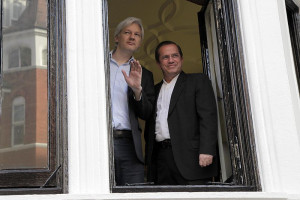 Julian Assange, the editor of the expose site WikiLeaks, is facing pressure from the US, according to Ecuadorian officials. They say negotiator are pressuring him to agree to demands, designed to provide an excuse to remove him from the Ecuadorian Embassy in London.

Fidel Narvaez, a former Ecuadorian diplomat in the Embassy, says the plan “will turn Ecuador from a protector into a persecutor, and the consul staff in London will be forced to act like prison guards.”

He claims the agreement is a list of demands that could make Assange lose his Ecuadorian citizenship, and his residence at the Embassy.

British paper The Guardian claims Russian diplomats held secret talks in London last year, with people close to Assange, to see if they could brand him as an Ecuadorian diplomat assigned to Russia, and smuggle him out in a car. The claim may be part of an attempt to smear Assange as a Russian spy, rather than a publisher of stories about corruption.

Democrats and Republicans have joined forces to threaten Ecuador with losing US aid payments, if it does not force Assange from his refuge in London.