M. Louise Hunt - Dissent in an Age of Conformity 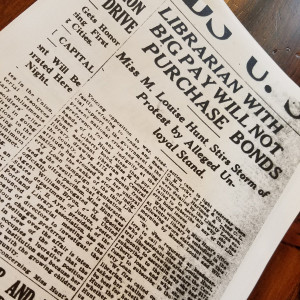 In this episode, we'll learn about the librarian whose opposition to the war caused a scandal in Portland, Oregon, during the spring of 1918, resulting in a barrage of negative media coverage as well as intense public condemnation. My guest, Dr. Kimberly Jensen, professor of history and gender studies at Western Oregon University and the author of several books and articles on the Progressive Era and on women's roles during the First World War, will help understand the context for this story of dissent in an age of conformity.

Update Required To play the media you will need to either update your browser to a recent version or update your Flash plugin.
Topic tags:
Activism, Civil Liberties, Education, Media