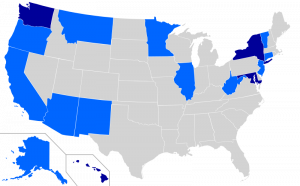 Tomorrow, a prayer breakfast will be held as part of the campaign against Measure 106. Oregon has long been on the pro-choice side of the abortion debate, at least when it comes to public policy. Oregon is currently one of seventeen states that provides state money for abortions for women who qualify for Medicaid (see map). Measure 106 would halt that funding.

Tomorrow, No Cuts to Care, a new coalition of faith, medical and activist groups is hosting a prayer breakfast in opposition to the measure. Elected officials, including US Rep. Suzanne Bonamici, will be in attendance. Due to the potential for disruption, we are not releasing the location of the breakfast, but anybody interested in attending should RSVP to info@nocutstocare.com for the necessary information.

For more, KBOO’s Sam Bouman spoke to Reverend Bill Sinkford, whose congregation at the First Unitarian Church of Portland is a member of the No Cuts to Care coalition.