Oregon's Largest Prison on Lockdown Over the Weekend 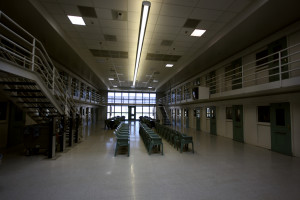 ONE PRISONER MOVED TO SOLITARY CONFINEMENT

Snake River Correctional Institution (SRCI), Oregon’s largest and most remote prison, was placed on lockdown this weekend. According to a press release from the Oregon Department of Corrections (DOC), an prisoner assaulted a guard at around 10:30 on Saturday morning. Seven other guards responded to the incident, and all eight were apparently hospitalized for evaluation afterwards. All have been released.

The prisoner was placed in “segregation.” While the press release and media reports do not elaborate further, “administrative segregation” is a common euphemism for solitary confinement.

During lockdown, all visits and inmate activities were cancelled. No follow-up information has been released, but KBOO reached out to both the DOC and SRCI for further information. According to the DOC’s communications office, SRCI is no longer on lockdown. However, according to an automated message at SRCI’s main number, the prison is on modified operations, meaning prisoners have no access to telephones, but visiting is allowed.

No information is available on the identity or status of the prisoner now in solitary confinement.