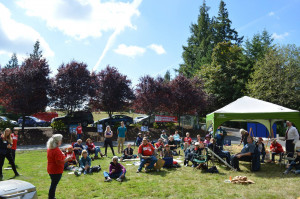 Northwest Innovation Works LLC (NWIW) is proposing to build the world's largest methanol refinery in the small SW Washington town of Kalama. NWIW aims to use tax breaks, grants, and other forms of financial assistance to build and operate its refinery. In August, Columbia Riverkeeper filed a Freedom of Information Act lawsuit challenging the U.S. Department of Energy’s withholding of information about U.S. government financial assistance for NWIW. If the Department of Energy moves forward with the loan guarantee and NWIW goes bankrupt, the federal government could be responsible for paying some or all of the $2.1 billion cost of building the refinery. The majority partner of NWIW, CAS Holdings, is a commercial offshoot of the Chinese Academy of Sciences, which is owned by the Chinese government.

On this episode of Locus Focus we talk with Jasmine Zimmer-Stucky, Senior Organizer with Columbia Riverkeeper, about their efforts to uncover government deals to underwrite the fossil fuel industry and attempts by the government to circumvent public access to records of immediate public concern.

Jasmine Zimmer-Stucky works to inform and engage residents in Oregon and Washington on coal export and oil terminals that would transform the scenic Columbia River Gorge into a dirty energy corridor. Jasmine led the public campaigns to stop would-be coal and oil export terminals from polluting Oregon’s air and water and now focuses on stopping fracked gas projects, as well, in Southwest Washington.