Climate Change or How to Defeat Medusa: A Conversation with Kathleen Dean Moore 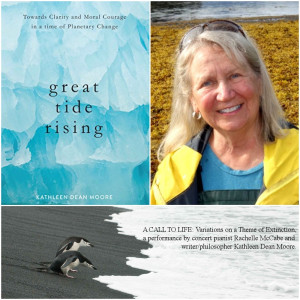 Moral Philosopher and Environmental-Thought Leader, Kathleen Dean Moore, tells the hard, urgent truth about the state of Earth and calls out for moral courage.

In this interview, she talked with John Shuck about her 2016 book, Great Tide Rising: Calling on Clarity and Moral Courage to Confront Climate Change. She discusses grandchildren, criminals in high places, religious hypocrisy, despair, hope, and moral integrity. Time is short. We have a mission. What is life for?

Kathleen Dean Moore is a writer, moral philosopher, and environmental thought-leader, devoted to an unrelenting defense of the future against those who would pillage and wreck the planet.

As a writer, Kathleen is best known for award-winning books of essays that celebrate and explore the meaning of the wet, wild world of rivers, islands, and tidal shores – Riverwalking, Holdfast, Pine Island Paradox, and Wild Comfort. But her growing alarm at the devastation of the natural world led her to focus her writing on the moral urgency of action against climate change and habitat destruction. Quitting her university position, Kathleen began to write in defense of the lovely, reeling world.

A moral philosopher, Kathleen holds a Ph.D. from the University of Colorado. For many years, she taught critical thinking and environmental ethics as Distinguished Professor of Philosophy at Oregon State University. She has published philosophical books on forgiveness (Pardons: Justice, Mercy, and the Public Interest), Apache philosophy (How It Is: the Native American Philosophy of Viola Cordova), Rachel Carson (Rachel Carson: Legacy and Challenge), and critical thinking (Reasoning and Writing). While at OSU, she co-founded and for many years directed the Spring Creek Project for Ideas, Nature, and the Written Word, where she now serves as Senior Fellow.

Two years ago, Moore left the University in order to write and speak full-time about the moral urgency of action to stop fossil fuels and the consequent global warming. She has addressed audiences ranging from 350.org activists to Nobel Conference scholars to Disneyworld executives and students all over the country — Alaska to Texas, New York to California — calling people to clarity and moral courage as they confront the forces that would wreck the world. Her new project, “A Call to Life: Variations on a Theme of Extinction,” is a collaboration with classical pianist Rachelle McCabe.

Kathleen is embedded in a family of environmentalists and biologists. Her parents were science educators who led nature walks in the beech-maple forests in Ohio. Her husband, Frank, a neurobiologist, is an expert on amphibian behavior. Her daughter, Erin, is an architecture professor at the University of Oregon, specializing in green construction. Her son, Jonathan, is a professor of coastal studies at Simon Fraser University in British Columbia. Kathleen and her husband live in Corvallis, Oregon, and in the summers, in a cabin where two creeks and a bear trail meet a tidal cove in Alaska’s maritime wilderness.

END_OF_DOCUMENT_TOKEN_TO_BE_REPLACED

The Abe and Joe Talk Radio Show
Representation without taxation