9/11 Unmasked, Part 4: Fran Shure and the Problem of the Media 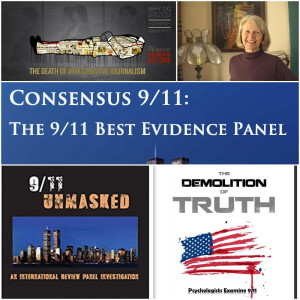 “The role of the media is the primary reason why good people become silent — or worse — about 9/11.” -- Frances Shure

This is the fourth of my four-part series on the 9/11 Consensus Panel, whose work was released in book form on September 11th, 2018.

[Note: Amazon, as of September 25th, now reports the book as "Temporarily out of stock" even as the publisher says Amazon has many copies (see my screen shot below). Amazon has made purchasing this book difficult to say the least. See Edward Curtin and Ken Hanly].

The book can be ordered from the publisher, Interlink Books at 9/11 Unmasked: An International Review Panel Investigation. The co-authors are David Ray Griffin and Elizabeth Woodworth.

Anyone who is still brainwashed by the official 9/11 story can immediately free themselves from their deception by reading this book. There is no longer any doubt that 9/11 was an inside orchestrated event for the purpose of unleashing two decades, with more to come, of American aggression in the Middle East.

In the first part of this series I explained why I was spending four episodes on one book. The reason is that this book could be the most dangerous book in America. If what this book presents is true, that the official account of September 11th 2001 is false, then we are in trouble. If any one of the 51 points of evidencepresented in this book is solid, then the American people have been played for fools.

The truth of the matter is that anyone who reads this book and considers the evidence presented likely willbecome skeptical of the official narrative. Unless, of course, the evidence is too scary to consider in the first place. That is the topic of this fourth and final episode.

According to psychotherapist, Frances Shure, the media are the problem. She has written a series of articles for Architects and Engineers for 9/11 Truth, entitled "Why Do Good People Become Silent"Or Worse"About 9/11?"Her latest installment in this series is called, "The Role of the Media: Whatever Happened to Investigative Journalists?"

She says the media define for us what are acceptable topics for conversation.

"If the media totally ignores an event, such as the evidence that 9/11 was a false-flag operation, then we don't take it seriously and are afraid to discuss it."

Frances Shure co-founded Colorado 9/11 Truthin 2004 and is a member of the 9/11 Consensus Panelas well as the Medical Professionals for 9/11 Truth.

She was included with a number of other social scientists in the film 9/11: Explosive Evidence: Experts Speak Out  that was produced by Architects and Engineers for 9/11 Truth. She also appeared extensively in "The Demolition of Truth: Psychologists Examine 9/11."

She was on Progressive Spirit in August 2017.

Other episodes in this series include:

1) 9/11 Unmasked: A Conversation with Elizabeth Woodworth and Graeme McQueen

2) 9/11 Unmasked, Part 2: A Conversation with Dwain Deets about Able Danger

3) 9/11 Unmasked, Part 3: David Chandler and the Day of Magical Physics