9/11 Unmasked, Part 3: David Chandler and the Day of Magical Physics 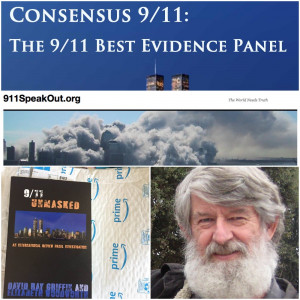 David Chandler shows that for the official story of what happened to the three World Trade Center Towers to be true, the laws of physics would have had to have been suspended.

In Part 3 of my four-part series on the work of the 9/11 Consensus Panel, I speak with David Chandler about the physics behind the collapse of the three World Trade Center Towers on September 11th, 2001. Why do the buildings look like they came down in controlled demolition by carefully placed explosives? "Because," says David, "That is what happened." He says, "I tell people, you can see what happened with your own eyes, by doing the physics, I am just proving that you're not crazy."

Even the distribution of the book has not been without intrigue. While the book was printed and sent to Amazon for distribution by September 11th, the Amazon website (as of September 17th) still says the item is not in stock.  I pre-ordered my copy on August 14th and it arrived September 17th. The publisher says Amazon does have the books. 9/11 Unmasked may be ordered from the publisher, Interlink Books.

Edward Curtin, who wrote a review of the book, also wrote a piece about this unusual action by Amazon, Amazon Censorship of 9/11 Unmasked.  Curtin writes:

"Readers should demand that Amazon immediately change their website and accept orders to be shipped today. Whether they are responsible for this game of chaotic discouragement or the intelligence services, who are fully capable of hacking into Amazon, as Edward Snowden has pointed out, I do not know. But something very odd is happening and Amazon should correct it."

Here also is a review from University of Sheffield Professor, Piers Robinson.

David Chandler has a Bachelor of Science degree in physics from Harvey Mudd College, a Master of Arts in education, and a Master of Science in mathematics from California Polytechnic University. He recently retired from teaching physics, mathematics, and astronomy at the high school and college levels since 1972, and has now moved to Denver. Since about 2007 he has been active as a researcher with what he calls the "science wing" of the 9/11 Truth Movement. He is currently the Coordinator of Scientists for 9/11 Truth, and worked for several years with Architects and Engineers for 9/11 Truth.

David became involved with the study of the building collapses of the World Trade Center when he realized he could use frame tracking software, which he used in his physics teaching, to measure the various velocities and accelerations associated with the 9/11 building collapses. He is best known for his measurements demonstrating the freefall of WTC 7, proving that NIST’s (National Institute for Science and Technology) claims were false. In its final report NIST changed its analysis of the motion of WTC 7, admitting freefall, but continued to deny its clear implications.

David has authored and co-authored a number of scientific papers including "Destruction of the World Trade Center North Tower and Fundamental Physics." He has also created a large number of videos analyzing various aspects of the World Trade Center Collapses and presented them to the public on YouTube. He maintains a web site in collaboration with several other researchers, featuring their collected works, at 911SpeakOut.org.