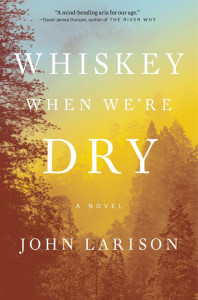 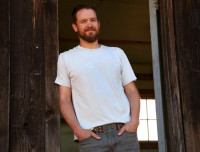 The western novel is an American literary tradition, and our guest today, John Larison, has written one of the best ones in recent memory. Whiskey When We’re Dry tells the story of teenaged Jessilyn Harney, who when her father dies in the spring of 1885, dresses up like a man and sets out to find her brother Noah, a notorious bank robber with a bounty on his head.

John is both a Duck and a Beaver, earning his undergrad degree from the University of Oregon, and his MFA from Oregon State University. During the eight years it took to write Whiskey When We’re Dry, he worked as a fly-fishing guide, a college writing instructor, and a freelance contributor to outdoor magazines. John was born in Oregon, but spent much of his  childhood in remote regions of Australia, the Caribbean, Canada, the South Pacific, Alaska, and the American West before graduating from high school in Ithaca, New York.

Whiskey When We’re Dry, published just two weeks ago by Viking Press, is John’s third novel. You can pick up a signed copy at Powell’s in Portland, or Grass Roots Books and Music in Corvallis. And you can meet John at his next reading, on Monday, September 24th, 6:30 to 8PM, at the Corvallis Benton Library, 645 Northwest Monroe Avenue, in Corvallis.