9/11 Truth Education is Good for Your Mental Health 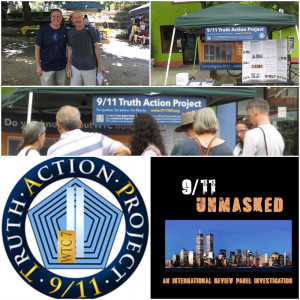 9/11 TAP’s mission is to build and mobilize a global grassroots movement to create a groundswell of civic support that achieves transparency and accountability for the crimes of 9/11, justice for its victims, an end to unwarranted wars, and restoration of our civil liberties.

The goal of this new movement is to achieve an independent, comprehensive Congressional investigation, by mobilizing and coordinating the efforts of volunteers across the U.S. and abroad, through local Truth Action Groups coordinated at the state, regional, national and international levels.

Dave says it is great for mental health to be in the streets educating people about the crimes of 9/11.

Since this LIVE interview will occur during KBOO's pledge drive, David Ray Griffin and Elizabeth Woodworth, authors of 9/11 Unmasked: An International Review Panel are providing copies of their newly released book based on the work of the 9/11 Consensus Panel to KBOO donors.  John Shuck is doing a series of interviews with some of these panelists on his syndicated show, Progressive Spirit.