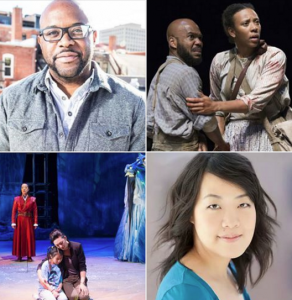 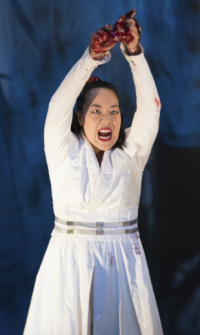 2 new premieres of cultural works at the Oregon Shakespeare Festival

Dmae features two new premiere productions at the Oregon Shakespeare Festival. First up we talk with Jessica Ko who plays a vengeful ghost in the U.S. premiere of  Snow in Midsummer by Frances Ya-Chu Cowhig adapted from a classical Chinese drama about injustice and trauma. Then we visit again with playwright Idris Goodwin about his world premiere play The Way the Mountain Moved that explores some untold stories in the shaping of the America that was the genesis of  the building of the Transcontinental Railroad. Both shows run through October 28th at OSF. More info at www.osfashland.org.

This thrilling update of a classical Chinese drama into a modern ghost story explores the legacy of trauma, the heart of injustice and the lengths to which we go for love. Sentenced to death for a murder, a young woman (Jessica Ko, Hannah and the Dread Gazebo’s shape-shifter) swears vengeance before her execution, cursing her city from beyond the grave to a catastrophic drought. Three years later, a wealthy businesswoman visits the parched, locust-plagued city to take over an ailing factory. When her young daughter is tormented by a mysterious apparition, locals are forced to face a past that no one wants to remember. Directed by Justin Audibert, who helmed the Royal Shakespeare Company’s hit 2017 premiere of this haunting play by Frances Ya-Chu Cowhig.

The Way the Mountain Moved
By Idris Goodwin

Directed by May Adrales
World Premiere runs through October 28, 2018 at the Thomas Theatre

In the world-premiere commission by OSF’s American Revolutions written by acclaimed playwright Idris Goodwin and directed by May Adrales (Vietgone), this powerful journey into the genesis of the Transcontinental Railroad explores the often untold perspectives on an iconic chapter in American History and the events that shaped the country’s moral and environmental future. In a remote desert in the 1850s, four men—a U.S. Army lieutenant, a sharpshooter, a botanist and an artist—set out to survey a route for the new continent-spanning railroad. After being scattered on separate odysseys, they cross paths with lost pioneers, cautious Native Americans, and an African-American Mormon couple unsure whether to befriend, fight or flee the newcomers. Whose dreams will prevail? This play joins All The Way, Roe, Sweat and other American Revolutions commissions that explore key moments of change in U.S. history.

Idris Goodwin is an award-winning playwright, director, orator and educator. He is the Producing Artistic Director of Stage One Family Theater in Louisville, KY for which he penned the widely produced And In This Corner : Cassius Clay. Other widely produced plays include: How We Got On, This Is Modern Art co-written with Kevin Coval, Bars and Measures, The Raid, and Hype Man: a break beat play. The Way The Mountain Moved, commissioned as part of Oregon Shakespeare’s American Revolutions series. He has work produced by or developed with The Actor’s Theater of Louisville, Steppenwolf Theater, The Kennedy Center, The Denver Center for The Performing Arts, Cleveland Playhouse, Seattle Children’s Theater, Nashville Children’s Theater, Boulder Ensemble Theater, TheaterWorks, Berkeley Rep's Ground Floor Program, La Jolla Playhouse, The Eugene O’Neill Center, The Lark Playwriting Center and New Harmony Project. He’s received support from the NEA, The Ford, Mellon and Edgerton Foundation, and is the recipient of InterAct Theater’s 20/20 Prize and The Playwrights’ Center’s Mcknight Fellowship.

Update Required To play the media you will need to either update your browser to a recent version or update your Flash plugin.
Download audio file
Topic tags:
Arts/Culture, Asian Pacific American, African American
Genre(s):
Arts and Culture