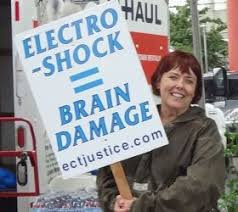 We welcome back to the studio Deborah Schwartzkopff, along with Mary Maddock and Jane Rice by phone

Host Paul Roland welcomes back Deborah Schartzkopff, anti-electroshock activist based in McMinnville. She hosts the website ectjustice.com and is pursuing a  national class action product liability suit around the devices used in electro-convulsive therapy (ECT) or electroshock.

Mary Maddock, on the phone from Ireland, is also an  electroshock survivor, who received modified 'ECT' without informed consent for the first time in the late 70s,  just 3 days after childbirth, having been drugged beforehand. Over a period of 6 weeks she was shocked over and over again.  She says, "All this time I was treated as  a guinea pig while I was on umpteen nueroleptics and other psychotropic drugs - on and off them as if they were smarties.   My memory was severely damaged both long and short term.  Prior to this I was an accomplished pianist and had taught others to play piano.   One of the pieces I played for examinations was Beethoven's Pathetique sonata which comprised three difficult movements.  After the damage it was as if I had never played it before.  It was difficult to enjoy music as I once had.  I re-learned and taught again but never could play like I did prior to my first encounter with psychiatry."

After receiving electroshock again in the early 80's , she  eventually got free from psychiatric harm in  2000 and has been drug free for the last 18 years. She learned to read and write again and became an activist, joining  MindFreedom International. She became  the first European board member and co founded MindFreedom Ireland with the support of her partner Jim.  She has also been a board member of ENUSP (European Network of ex Users and Survivors of Psychiatry).

Jane is a childhood psychiatric and shock survivor. She writes about shock and other psychiatric atrocities with goals beyond informing; she hopes also provide solutions and encourage self-advocacy. Jane aspires to develop therapies that will help her and other shock survivors regain their abilities and have a life worth living after shock. You can find her at her website, lifeafterect.com Youtube and @lifeafterect handle on Youtube, Facebook, Twitter, and Instagram.

Update Required To play the media you will need to either update your browser to a recent version or update your Flash plugin.
Download audio file
Topic tags:
Activism, Civil Rights/Human Rights, Disability, Women