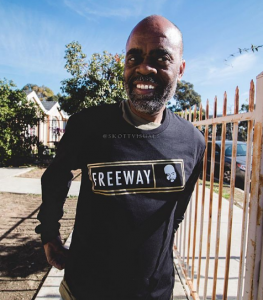 Today, we broadcast our one-hour special with Rick Donnell Ross, better known as "Freeway" Ricky Ross, and Cornell "Coach" Ward. Ross and Ward joined us for a special in-studio discussion on their role in the explosion of crack-cocaine that hit U.S. streets in the 1980s, the price they paid, and their work now to prevent gangs and inspire youth to avoid the path they took. Ross is the subject of a documentary by award-winning filmmaker Marc Levin, entitled "Freeway: Crack in the System," that chronicles early days of the crack epidemic, the direct influence of Nicaraguan traffickers in bringing the drug to the United States, and the CIA, who turned a blind eye to the trade. The Reagan administration used the profits from crack-cocaine sales, starting in Los Angeles, to fund an illegal war against the left-leaving Sandinistas in Nicaragua. President Reagan backed the opposition to the Sandinistas, called the Contras. Congress initially refused to fund the Contras because of their abysmal human rights record. The impact of the crack-cocaine epidemic is still being felt in South Los Angeles and other communities across the United States.