Roseanne Canceled...should the NFL be next? 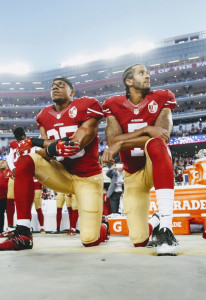 It’s time to cancel the NFL and its plantation-style politics....

If you want a modern example of nakedly racist authoritarianism in America, look no further than the National Football League.

Make no mistake: Forcing players to go inside the locker room or face fines is a blatant attack on the free speech of black players (who make up almost 70 percent of the league). As a reminder, the black players were never protesting the flag or the anthem itself. They were making a statement about the racism, injustice and police brutality in the United States. However, the NFL, like America in so many ways, has shown that it is more interested in silencing the speech of black players than in “advancing the goals of justice and fairness in all corners of society,” as its new policy claims. In attempting to make white America comfortable, the NFL has decided to to deny players the very freedom of speech that our military members have fought for and died to protect. In that, the NFL’s policy is way more disrespectful to what the flag and anthem represent than a player kneeling could ever be. President Trump’s tweets in support of forcing players to stand and his comments about protesting players — “get that son of a bitch off the field” — and that if they don’t stand, they “shouldn’t be playing” — mean that he is on the side of censoring Americans.