CAFOS on the Columbia 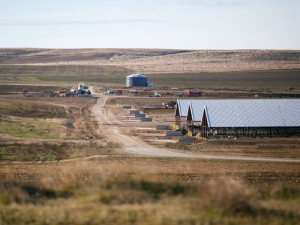 Last year thousands of Columbia Riverkeeper members and others called on Governor Brown and the Oregon Department of Environmental Quality to protect the Columbia River and rural communities from factory farm pollution. They didn’t listen. In March of 2017, Oregon gave the green light for one of the largest mega dairies in the nation. Turns out you were right; Lost Valley cannot control its mountains of manure. In late February 2018, Oregon sued Lost Valley to end months of unauthorized pollution.

On this episode of Locus Focus we talk with Brian Posewitz, attorney for WaterWatch of Oregon, and Lauren Goldberg, staff attorney with Columbia Riverkeeper, about the next steps that are needed to clean up and possibly shut down Lost Valley Farm.

Brian Posewitz has been an attorney in Oregon since 1991, and joined WaterWatch’s staff in 2015. In addition to his civil litigation work, Brian handled a variety of water-related cases for WaterWatch and private clients while in private practice. He also is a former WaterWatch board member.

Columbia Riverkeeper is working with a coalition of family farm, public health, animal welfare, and environmental groups to protect public water and air resources from factory farms. Other coalition members include: the Oregon Chapter of the Sierra Club; the Center for Biological Diversity; Columbia Riverkeeper; Oregon Physicians for Social Responsibility; WaterWatch of Oregon; Food & Water Watch; Socially Responsible Agriculture Project; the Center for Food Safety; the Humane Society of the United States; Friends of the Columbia River Gorge; and Humane Oregon.

Update Required To play the media you will need to either update your browser to a recent version or update your Flash plugin.
Download audio file
Topic tags:
Energy/Natural Resources, Environment/Climate, Community Building, Corporations