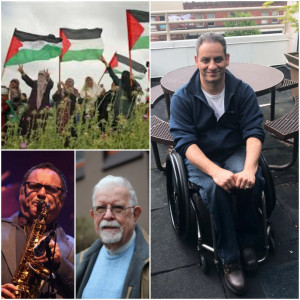 May 15th marks the 70th anniversary of Israel’s statehood. Palestinians refer to this as the Nakba, the Catastrophe, when more than 700,000 Palestinians left their homes from fear or were forcibly removed by Israelis who took their homes. On this 70th anniversary of the occupation, the people of Gaza have been staging a non-violent demonstration, The Great March of Return that culminates Tuesday the 15th.

According to the Middle Eastern Monitor, “The demonstrations of the Great March of Return and Breaking the Siege started on 30 March 2018. Since then Israeli forces have killed 53 demonstrators and wounded more than 8,500 others.”

On this special edition of the Beloved Community, John Shuck’s guests will speak about the ongoing Nakba for the people of Palestine and Gaza from their unique perspectives.

Waddah Sofan was shot and paralyzed by Israeli soldiers during the First Intifada in 1989. Waddah lives in Portland and considers himself “part of Palestinian/American, Muslim, Middle Eastern, people of color and disabled communities.”

Gilad Atzmon, is a British Jazz artist and author. Gilad was born in Israel in 1963 and trained at the Rubin Academy of Music, Jerusalem (Composition and Jazz). Gilad writes on political matters, social issues,  Jewish identity and culture. He will be in Portland for a jazz concert May 14th and a talk on Truthfulness May 15th.

Retired Episcopal priest, Richard Toll, also of Portland, is president of the Board of Trustees of Friends of Sabeel North America (FOSNA). Rev. Toll received an honorary doctorate from the Church Divinity School of the School of the Pacific in Berkeley, California for his  commitment to justice and peace in the Holy Land.

**Correction** In the original broadcast version, it was stated that Gilad Atzmon works for International Middle East Media Center. He does not and is not affiliated with that organization. The host apologizes for this error. This statement has been removed from the audio.

**Note** Catch The Beloved Community every second Friday at 9 am Pacific no matter what show might happen to be advertised in its place.