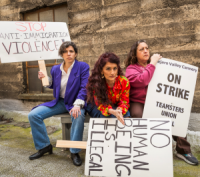 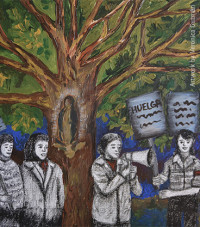 Watsonville: Some Place Not Here By Cherríe Moraga features women in a cannery strike in California

Guest host Jenna Yokoyama features Milagro Theatre's last play of the season, Watsonville: Some Place Not Here By Cherríe Moraga about women in a 1985 – 1987 Cannery strike in California. We'll hear from director Elizabeth Huffman and actor Bunnie Rivera. We'll also be giving away tickets to the Milagro show during the KBOO membership drive as well to Portland Center Stage's AND SO WE WALKED, Northwest Children's Theatre's PETER PAN and Fuse Ensemble's production of CABARET

WATSONVILLE: SOME PLACE NOT HERE
By Cherríe Moraga, directed by Elizabeth Huffman

Thursday, May 3, 7:30 PM — Preview and wine tasting with Coopers Hall prior to the performance
Friday, May 4, 7:30 pm – Opening Night and reception catered by Tortilleria Y Tienda De Leon following the performance
Sunday, May 6, 2:00 PM – Matinee and post-show talkback

MORE ABOUT THE PLAY: The state of the nation is a polarizing one, punctuated by hotly debated topics. Not the least of which is anti-immigrant legislation and policies regarding the working class. While it may seem like these issues have only just recently permeated the public consciousness, this has been a point of contention for years, as Cherríe Moraga shows us in her play Watsonville: Some Place Not Here. In Watsonville, California, workers’ rights in a cannery plant are threatened when wage cuts are instated and a new government bill to seek out undocumented immigrants is introduced. Now, what are the citizens to do? The women take charge and unite together. What will happen next, and what are they willing to sacrifice to preserve their way of life?

PLAYWRIGHT BIO: Cherríe Moraga is a co-editor of This Bridge Called My Back: Writings by Radical Women of Color, republished in a new edition by SUNY Press in 2015. As a political and literary essayist, she has published several collections of writings, including A Xicana Codex of Changing Consciousness — Writings 2000-2010. Moraga is the recipient of the United States Artist Rockefeller Fellowship for Literature, the American Studies Association Lifetime Achievement Award, and the Lambda Foundation’s “Pioneer” award, among many other honors.