The Jesus Hoax: A Conversation with David Skrbina 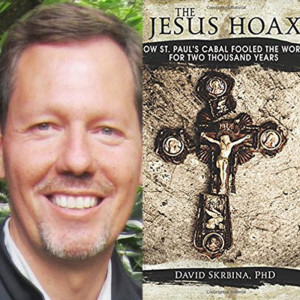 Dr. David Skrbina makes the case that Christianity started as a hoax by Paul..

"Jesus of Nazareth is one of the most famous men in history.  There are good reasons to believe that he walked the earth some two thousand years ago, and was eventually crucified.

But what about Jesus Christ, son of God?  What if he never existed?  What if the divine, virgin-born, resurrected Jesus Christ was a myth, a lie—even a hoax?  That would have huge implications for modern-day Christianity; it would mean that there is a gigantic falsehood at the core of the religion of some two billion people.

In this book, Dr. David Skrbina presents a profound and stunning theory:  that St. Paul and a band of friends constructed a ‘Jesus hoax.’  They took a kernel of truth based on Jesus, the man, and turned him into the divine savior of humanity.  They did so as a way to strike back at the hated Roman Empire, and to undermine its strength among the common people."

That is from the back cover of The Jesus Hoax: How St. Paul's Cabal Fooled the World for Two Thousand Years, by Dr. David Skrbina.

This is the third part of series on Revisioning Christianity. Different scholars bring different views to help us understand the history of Christianity and its future. How did Christianity become empire’s religion? Is it believable today? Was it ever believable? Does it yet have a message to inspire peace and justice? Or is it the result of a malicious hoax and a bad idea?"

1) Bart Ehrman, author of the newly released, The Triumph of Christianity: How A Forbidden Religion Swept the World,

2) John Dominic Crossan, who with his wife, Sarah Sexton Crossan have just released Resurrecting Easter: How the West Lost and the East Kept the Original Easter Vision.

3) John Shelby Spong, author of the newly released, Unbelievable: Why Neither Ancient Creeds Nor the Reformation Can Produce a Living Faith Today,

4) Angela Yarber, creator of the Holy Women Icons Project, and this week,

Dr. David Skrbina is a senior lecturer in philosophy at the University of Michigan, Dearborn, where he's taught since 2003.  His areas of expertise are philosophy of mind, philosophy of technology, and history of religion. Professor Skrbina's books include Panpsychism in the West, The Metaphysics of Technology and Mind that Abides.

Professor Skrbina corresponded extensively with Ted Kaczynski, the Unabomber, and in 2010 published Technological Slavery. This was the first book written by Ted Kaczynski.  It contains the only corrected version of his manifesto, five previously unpublished essays, and about 100 pages of letters to Dr. Skrbina.

Dr. Skrbina is a pioneer in eco-philosophy encompassing ethics, metaphysics, and cosmology and is Deputy Director of the Eco-Philosophy Center. He ran for Lieutenant Governor for the state of Michigan in 2006 with the Green Party. He has a master’s degree in Mathematics and a Ph. D. In philosophy.

Update Required To play the media you will need to either update your browser to a recent version or update your Flash plugin.
Download audio file
Topic tags:
Faith/Religion/Spirituality, Government/Politics, History, Media, War/Peace

END_OF_DOCUMENT_TOKEN_TO_BE_REPLACED

Civic Cipher
The Mistreatment of Black Women / Midterm Voting is more important than you know!