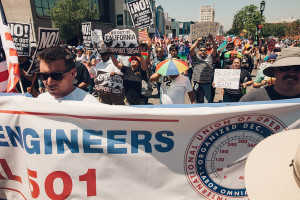 In the last three days of January, Immigration and Customs Enforcement agents launched a massive immigration sweep in Northern California. It is the largest localized action of its kind since Trump took office.

Businesses in San Francisco, Sacramento, and San Jose were served with notices that ICE intended to audit their hiring records, and were given three days to prepare. 77 locations, none of which have been identified, were audited. That’s about 25 per day.

This follows last month’s raids at 7/11 stores across the country, including six in San Francisco, and four here in Portland.

In all, nearly 100 stores were targeted, and 21 people were arrested during those sweeps. No arrests have been reported as a result of the most recent action, but ICE indicated that investigations were ongoing.

ICE inspections can result in fines and arrests for employers and employees. Workers who can’t prove their legal right to employment must be fired.

ICE spokesman James Schwab said in a statement that the workplace audits were part of a “strategy focused on protecting jobs for U.S. citizens." However, statements made by Acting ICE Director Thomas Homan suggest that California was targeted because of its sanctuary status. In October, California Governor Jerry Brown signed Senate Bill 54 into law, extending sanctuary status to the entire state, and strictly limiting information-sharing and collaboration between local law enforcement and federal immigration offices.

In January, Homan told Fox News that “California better hold tight," and that if local politicians “don’t want to protect their communities, then ICE will.”