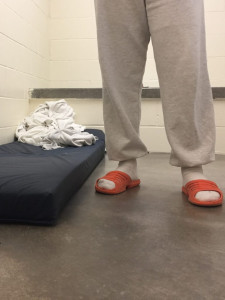 Karen James interviews Sarah Radcliffe, an attorney with Disability Rights Oregon, about her investigative report “Don’t Look Around”: A Window into Inhumane Conditions for Youth at NORCOR, that found that kids held at the Northern Oregon Regional Correctional Facility (NORCOR) in The Dalles endure harmful and counterproductive management strategies that are not tied to improved safety or security of the facility. Kids held at the jail face frequent, prolonged, and undocumented isolation; are prevented from reading, writing or drawing, and are subjected to harsh and purposeless rules such as prohibitions against “looking around” or asking what time it is.   As with all juvenile detention facilities in Oregon, NORCOR operates without any county, state, or federal oversight to ensure that the kids are held in safe and humane conditions. This lack of accountability  has allowed NORCOR to neglect the basic mental health and social development needs of kids in its custody.

NORCOR is a regional jail created through a partnership between Wasco, Hood River, Sherman, and Gilliam counties.  It holds 100 to 130 adult inmates and roughly 20 to 24 youth detainees. One third to half of youth at NORCOR are incarcerated due to probation violations. These are often “technical” violations, meaning that the offense wouldn’t warrant detention if the child were not on probation. NORCOR maintains contracts for youth detention with 17 Oregon counties, the Warm Springs Reservation, several Washington counties, and Immigration and Customs Enforcement (ICE).

Disability Rights Oregon upholds the civil rights of people with disabilities to live, work, and engage in the community. For 40 years, the organization has served as Oregon’s Protection & Advocacy system.