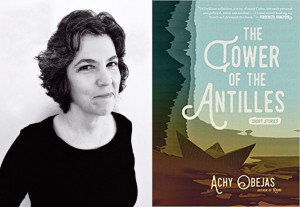 Tonight, we'll be talking with Cuban-American author and translator, Achy Obejas. "In her novels and story collections, Achy Obejas explores the complexities of Cuban American identity, lesbian sexuality and the ways these two intersect in the immigrant journey. A recipient of two Lambda Literary Awards, she has published three novels, a poetry collection, and the story collection with the humorous title, We Came All the Way from Cuba So You Could Dress Like This?"*

Achy's new book is The Tower of Antilles, short stories of Cuban migrants seeking to escape their pasts.** Achy will be reading at Powell's on Hawthorne this Thursday, along with author Robert Arellano, author of 'Havana Libre'.

Then we'll hear an interview recorded over the weekend with Portlander Jonathan Irwin, who has spent time in Israel and Palestine, and developed new sensibilities about solidarity in action for and with Palestinians, including queer Palestinians. Jonathan gives us his personal take on the complex issues of identity, safety, and sexuality that shape our lives, as well as giving us a look at local actions and organizations promoting solidarity with Palestinians.

Our conversation was prompted by A Wider Bridge founder Arthur Slepian's visit to Portland on Wednesday to discuss strategies for tying queer people and progressives more tightly to support for Israel. Jonathan dedicates his participation in our conversation for KBOO to his late friend Renen Raz, self-described anti-Zionist, anti-fascist, and anti-apartheid.

This Saturday, a Women's March for Palestine will be held ath Pioneer Courthouse Square, beginning at noon.

On February 8th, SUPER (Students United for Palestinian Equal Rights) at Portland State will host a screening of the film Pinkwashing Exposed, a documentary about the efforts by queer activists to disrupt the City of Seattle's implicit sanctioning of Israeli efforts to narrow definitions of queer freedom to the example set by Israeli 'democracy.' Pinkwashing Exposed will be at PSU's 5th Avenue Cinemas.

A remix of Fleetwood Mac's Tusk, notable for the 'missing' horn intro;

People not Places, by Invincible ft Abeer. According to Detroit artist Invincible, "The song takes the listener on a journey through a haunted 'birthright' tour where the buried Palestinian significance of each location comes to light. Along the route i expose the process of historic and continued colonization as being even deeper than land seizure and ethnic cleansing of Palestinians, but one that is invested in erasing the Arabic language, culture, and memory."

END_OF_DOCUMENT_TOKEN_TO_BE_REPLACED

Evening News
Protesters push for eviction ban extension as 90,000 could lose housing due to back rent