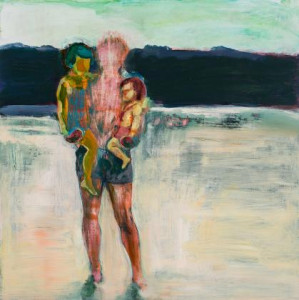 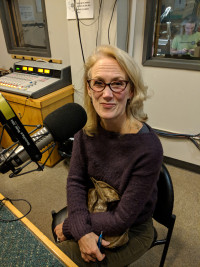 On Tuesday December 12, 2017, Joseph Gallivan interviews Ellen Goldschmidt about her show Hot Lava: Family Pictures, which is on now at Blackfish Gallery through December 30, 2017.

Lifelong Portland resident Goldschmidt talks about how she turned rivalry and friendship with her sister into new imagery when she decided to rework childhood photos in acrylics, charcoal and collage.

What if childhood is the reality and adulthood

Is the fairytale? That is a question Ellen

Goldschmidt examines in her latest

snapshots from the late 50s and early 60s,

petrified on the surface, inventing color

and collaging photo references together to

The artist’s focus is on the quality of

members and the hidden dysfunction that

festered below a veneer of psychological

health. Taken as a whole the work conveys

Goldschmidt describes Hot Lava: Family Pictures as “my attempt to create, in the language of

paint, a partial memoir of my emotional life.” Can painting function as memoir? Can an image

evoke as much or more than a written account of a life? These are additional questions

Goldschmidt says. In re-picturing her past, the artist reveals her own emotional through lines

and acknowledges the insistent whispers of childhood that persist in us all.

This show was recorded at KBOO on Dec. 9, 2017 in Studio 1. It was edited by KBOO volunteer Sam Parrish.