Summer of Fire, Smoke and Ash 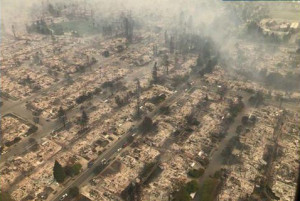 Five weeks ago a massive fire roared through the western half of the Columbia River Gorge, while hundreds of thousands of acres burned across the rest of Oregon, and more than another million in Montana. This week massive wildfires erupted across far more populated areas in Northern California, causing record-breaking damage and loss of life. Why has this year's fire season in the West been so intense? Is this a precursor of what is becoming the new normal?

On this episode of Locus Focus we talk again with Dominick DellaSala, president and chief scientist at the Geos Institute in Ashland, Oregon. In our past conversations with Dominick, we have stressed the important role that fire plays in ensuring healthy forest ecosystems. But after this summer of fire, smoke and ash across the Pacific Northwest, and now Northern California, how do we reconcile our understanding of the need for forests to burn from time to time, with the horrific realities now in our faces.