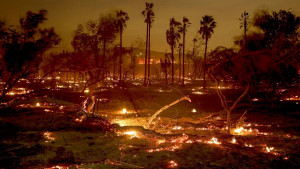 Just a few days after putting away equipment used in fighting the Eagle Creek Fire, Multnomah County has decided to back out and is sending help that consists of a strike team of 5 fire engine and their crews to Northern California to assist in the North Bay Fires. The team will join up with other Oregon city crews on their way. California's Governor Brown has already declared a fire emergency in Napa, Sonoma and Yuba counties where over 21 people have been killed. Nearly 600 people unaccounted for and over 2,000 homes and business burned to the ground. Over 7,000 acres have been burned there so far.

Two men have been arrested late Monday evening by Spokane police on state charges of assault and malicious harassment. Jason Edward Cooper and his friend Donald Lucas "Luke" Pritchard, both in their 30s, repeatedly threw racial slurs at a black man named Norris Cooley clearing out his garage. The two suspects yelled at him repeatedly as he hid in the house with other people staying inside as well, eventually taking out a handgun and shooting into his home. Luckily nobody was injured or killed. Cooley did not respond to the yelling from the two men and had stayed hidden in the house before the shots were fired. The two men face federal hate crime charges and possibly armed career criminal charges for illegal possession of firearms and drive-by shooting charges if authorities decide on a federal prosecution.