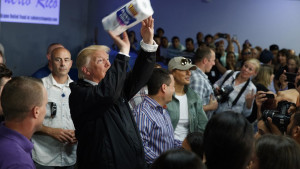 Trump had recently visited Puerto Rico to oversee recovery efforts from the aftermath of Hurricane Maria. However, he had made relatively insensitive comments. One of which included him saying that the people 'didn't need flashlights' despite nearly 90% of the island was still without electricity. Trump also went on to say that Puerto Rico has 'thrown our budget a little out of whack'. He compared the racages of Hurricane Maria to those of Katrina, saying the Puerto Rico should be proud that 'only 16 people had died' compared to thousands due to Katrina. Trump praised Puerto Rican governor, Ricardo Rossello, who has spoken positively of recovery efforts. He did not mention San Juan Mayor Carmen Yulin Cruz, who was critical of Trump, but was also begging desperately for help for their Puerto Rican citizens.

President Donald Trump had also recently addressed first responders and emergency personnel in Las Vegas Wednesday and lauded their courage in the aftermath of the mass shooting that ocurred Sunday night. 'America is truly a nation in mourning,' he had said. The president had struck a 'subdued tone' throughout the seven minute remark to officers in the Las Vegas Metropolitan Police Department. The police identified the shooter as 64-year-old Stephen Paddock, who had opened fire on a concert crowd from his room up on the 32nd floor of the Mandalay Bay Hotel, killing 58 and injuring over 500 people. Officials have not yet found a motive behind the shooting.