"You in Midair" with Danna Schaeffer 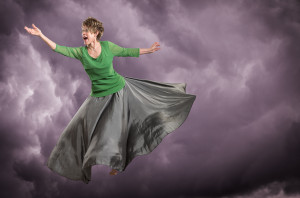 Host James Dixon talks with Writer, teacher, therapist, lobbyist and actor Danna Schaeffer will present her one-woman show, You in Midair, from October 5th through 15th, at New Expressive Works. You in Midair is directed by Julie Akers. Previously titled My Little Jezebel, this full production follows a January 2017 staged reading with PDX Playwrights in the Fertile Ground Festival New Works.

On July 18, 1989, Danna Schaeffer received the worst news a parent can hear: a phone call from a stranger telling her that her only child has been murdered. Rebecca Schaeffer, a young Hollywood star headed for a successful career in television and film, had been shot on her doorstep. In the years that followed, her parents endured the murder trial and then channeled their grief into social action. You in Midair is an intimate, harrowing, sometimes funny and ultimately joyful story that examines the searing pain of loss, the consolation of memory and the triumph of hard-won wisdom.

“I'm doing this show because the time had come for me to tell Rebecca's story from my perspective,” said Danna Schaeffer. “I am acutely aware of the universe of tragedy and loss we witness and read about every day. This is but one of those stories.”

Shawn Levy, author of Dolce Vita Confidential, said, “You in Midair combines horror, pathos and comedy in ways you've never seen before. You will laugh and you will cry, often at the same time.”

“Danna Schaeffer's performance is extraordinary, at once tragic, smart, and just flat out entertaining. And throughout, of course, you wonder how this woman has not simply survived the loss of her beloved child, but has also managed to thrive,” said Karen Karbo, author of The Stuff of Life.

Danna grew up in Los Angeles, Baltimore, and New York City. She married psychologist Benson Schaeffer and had her daughter Rebecca in 1967. Danna received an MA and MFA from the University of Oregon and the family moved to Portland where Danna taught English and writing at Portland area colleges and universities. She published short stories, poems, articles and reviews, and her play City Women which premiered in 1988 and earned the Kennedy Center’s American College Theater Festival Lorraine Hansberry Playwriting Award. After Rebecca’s death, Danna spent two years lobbying for reasonable gun laws and continued writing plays. In 1997, Danna and her brother Adam created the audio website BookRadio. She created the online fortune-telling avatar Madame Olivia, who dispenses advice to this day. Danna earned an MA in Counseling Psychology in 2003 and was in private practice in downtown Portland until 2013. In December, 2013 she closed her practice to focus on her longtime passion for writing and wrote a mystery, Death Never Dies, and a memoir, Kissing Upside Down. Her play, You in Midair, is a solo performance about her surviving the loss of Rebecca.

ABOUT REBECCA SCHAEFFER
Rebecca was born in Eugene, Oregon and grew up in Portland where she went to Lincoln High School and was elected president of her youth group at Temple Beth Israel. She modeled in New York the summer after the 11th grade and began getting acting jobs. She landed a co-starring role in the ensemble sitcom My Sister Sam and moved to Los Angeles where the show enjoyed a two-year run.  Rebecca's career took her to movies like Radio Days and Scenes from the Class Struggle of Beverly Hills. She was murdered on July 18, 1989.

Written by and starring Danna Schaeffer

Update Required To play the media you will need to either update your browser to a recent version or update your Flash plugin.
Download audio file
Topic tags:
Activism, Arts/Culture, Family, Legislation, Women