Thresholds of Hearing: The world beyond our senses 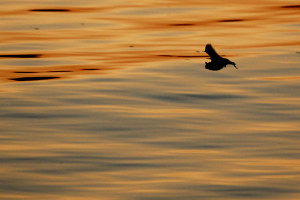 There are wide spectra of audio we humans cannot hear...

Today we are actually going to explore our own thresholds of hearing, more specifically, we have an opportunity to experience what we usually CAN'T hear. The average human can perceive sounds between 20 Hz and 20 kHz, everything below that range is, for us, infrasound—this includes the sounds of waves, wind, thunderstorms, earthquakes, and coronal changes that many species, especially migratory ones like pigeons, can hear. Everything above that range, or threshold, is considered ultrasound. There is nothing physically different about these sound waves...we just can't hear them, like dog whistles. I am VERY excited to play for you a segment from an ultrasonic recording made in Barro Colorado, a rainforest island off the coast of Panama. This recording comes to Threshold Shift by way of Bill McQuay, an audio producer for NPR and the Cornell Lab of Ornithology. He graciously opened his archives and gave me several pieces, the first of which you will hear today. Small portions of this soundscape originally appeared on NPR's All Things Considered on April 4, 2017 under the title Sound Matters: Sex and Death in the Rainforest by Christopher Joyce and Bill McQuay.  The audio was recorded by the Dartmouth College research team of Hannah ter Hofstede and Laurel Symes, who slowed down this ultrasonic field recording to 1/10* of its original speed in order to bring it into our auditory range. In this case, the team was researching the life and death struggles of the hunted and the hunters.  As they put it, “This recording is part of ongoing research to understand the interactions between bats and the insects that hear them.” When the recording starts you will hear a low, almost choral, sound. That sound is the crickets in the forest...again slowed to 1/10* their usual speed. You will also hear higher pitched song patterns, which are the katydids, calling for mates. Every so often you will hear the highest pitched chirrups, which are the bats as they search for the katydids. Enjoy!

*We subsequently found out it was actually 1/20th of the original speed! Just well past the original air date...so to correct the record, these species actually communicate at rates twenty times faster than what our bodies can comprehend.

Update Required To play the media you will need to either update your browser to a recent version or update your Flash plugin.
Topic tags:
Activism, Animals, Education, Environment/Climate, Science/Technology
Genre(s):
Environment/Sound Art, Eclectic, Experimental