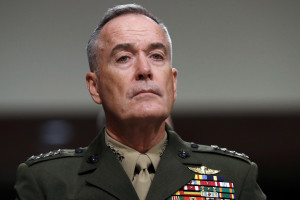 General Joseph Dunford, who is the nation's highest-ranking military officer, told the Senate on Tuesday that he does not support the plan to ban transgender people from the armed forces. The head of Joint Chiefs of Staff said that they believe that if any person meets the physical and mental standards, then they should be allowed the opportunity to continue to serve the nation. An estimated 15,000 trans people are currently serving in the military and are allowed to continue to serve at least until an expert panel determines how to implement the ban.

30,000 people have been evacuated in Ukraine's central Vinnytsia region after a huge arms depot storing missiles caught fire and exploded in what authorities called a possible act of 'sabotage' on Tuesday. Two injuries have been reported, no casualties, but many homes and other buildings and structures have been damaged. Nearly 180,000 tons of munitions, some new and some ageing Cold War weapons, were thought to have been stored at the depot. The fire caused a series of explosions that sent large balls of fire into the night sky and had shaken the ground. Prime Minister Volodymyr Groysman called for a thorough investigation and claimed that the arsenal of the Ukrainian Army was within the depot. Groysman also seemed to think that it was no accident because of this fact.