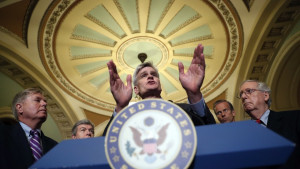 The Senate Finance Committee held a hearing on the Cassidy Graham Bill, a Republican proposal to replace the Affordable Care Act. Committee Chair Orrin Hatch declared a recess immediately after the hearing opened in order to allow Capitol Police to remove dozens of disability rights activists from the hearing room. Some cases involved dragging people out of their wheelchairs. Oregon's own senator Ron Wyden is the ranking minority member of the committee and is helping lead the opposition. The hearing was adjourned after soon after 4PM PST with no votes being taken.

Governor Kate Brown last week signed four education measures into law at a ceremony at Faubian School in Northeast Portland. They are intended to improve student outcomes, invest in equitable access to education, and to encourage student engagement.

The FBI has recently released its annual Uniform Crime Report for 2016. According to the FBI, the number of violent crimes reported to law enforcement was 4.1% higher in 2016 than in 2015. This is the second year in a row that the number of reported violent crimes has increased. Property crimes reported to police dropped in 2016 for the fourteenth consecutive year, falling by about 1.3%. Most criminal victimizations go unreported, so it's important to note that the Uniform Crime Report only measures and reports on crimes reported to police. Rises and falls in the figures may show increase or decrease in actual crimes being committed, or could mean people are more or less willing to report crimes to police. Overall, police made more than 10.6 million arrests in 2016, which includes 500,000 arrests for violent crimes, 1.3 million for property crimes and 1.6 million arrests for drug offenses.