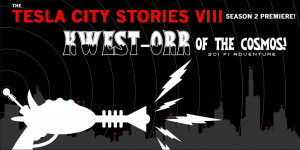 We're fortunate here in Portland to have such a vibrant community of live storytelling and radio theater. There's Willamette Radio Workshop, Portland Story Theater, Back Fence PDX, the Mystery Box Show, Mortified, and The Moth, just to name a few.

One of the most intriguing members of this community is Tesla City Stories, who perform monthly at Portland's Fremont Theater.

At a Tesla City Stories show, you'll experience an evening of live radio theater, with scripts from the archives of the little-known Tesla Broadcasting Company, a radio network that operated for the short period between 1943 and 1945.

These scripts include a wide variety of shows from the Golden Age of Radio -- sitcoms, mysteries, thrillers, westerns, and even sci-fi. They're performed live on stage, just as they were three quarters of a century ago, complete with music and sound effects.

The new season of Tesla City Stories begins this Saturday. To find out more, we talked with Jerry Chrisman, the group's co-founder and executive producer.

Update Required To play the media you will need to either update your browser to a recent version or update your Flash plugin.
Download audio file
Topic tags:
Arts/Culture, Humor, Media, Radio Theater
Genre(s):
Radio Theatre