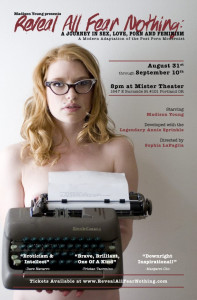 August is going to be a very hot month here in Portland! On tonight's show we do absolutely nothing to cool things down.

Our guest is Madison Young -- director, writer, artist, feminist pornographer, and sex educator. August is the month of Madison here in Portland. She's bringing her one-woman show -- Reveal All Fear Nothing: A Journey in Sex, Love, Porn and Feminism -- to the Mister Theater for eight shows starting August 31st. She'll also be performing as part of the Mystery Box Show at the Alberta Rose Theatre on Saturday, August 12th, and again at Whoopee! A Sex Positive Variety Show at the Bossanova Lounge on Sunday, August 20th. To sweeten the pot, we'll be giving away VIP tickets to the September 3rd show of Reveal All Fear Nothing to some lucky listener.

All that, plus the usual comedy, novelty bits, and songs expounding on this episode's theme. Which unfortunately we can't reveal on such a family-friendly web page.

Update Required To play the media you will need to either update your browser to a recent version or update your Flash plugin.
Topic tags:
Arts/Culture, Gender, Health, LGBTQ, Radio Theater, Sexuality
Genre(s):
Radio Theatre, Arts and Culture, Spoken Arts