McNamara's Folly: The Use of Low-IQ Troops in the Vietnam War 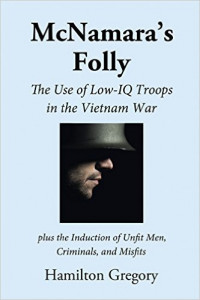 Marvin and Angie will interview author and Army veteran Hamilton Gregory about his book "McNamara's Folly: The Use of Low-IQ Troops in the Vietnam War." Project 100, 000 was promoted as a great social experiment that would provide troops to the Army and, in turn, the Army would teach these men to read and write—and brush their teeth. But the Army never got around to teaching these men anything. They just got shipped to Vietnam.

The men in this group were referred to kindly by President Johnson as “second class fellows.”  They were the men who were too heavy, too thin, too short. They often had medical liabilities, psychiatric disorders, criminal tendencies, and maladjustment problems. After these men served, they were often separated under other than honorable conditions.