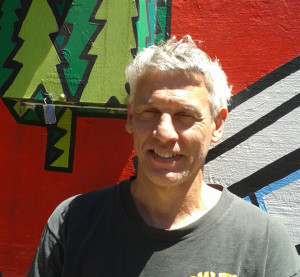 A conversation with KBOO programmer, Paul Roland, about the Waldensians and Activism

Paul Roland is host of KBOO’s Wednesday Talk Radio and Rise When the Rooster Crows folk music show (1st and 3rd Thursdays).  After studying philosophy at Wesleyan University (CT), he made his way to the West Coast in 1985, ending up in Portland.  Paul got involved with Earth First! and the forest protection movement and was one of the early tree-sitters at Breitenbush in November 1986.  He also was an activist in solidarity with Native fishing rights and culture, supporting the work of the Columbia River Defense Project.  He was part of the Alliance newspaper collective from 1986 until the early 90s as it established itself as an important local and bioregional publication, with (for a time) editions in Portland, Salem/Corvallis, Eugene and Olympia.

Paul also worked for several years with Sunflower Recycling Cooperative, which was the first residential and office pick-up recycler in the Northwest and perhaps the nation and helped push for city-wide recycling.  Paul started to volunteer with KBOO in 1988 and had his own Radiozine program on Wednesdays for many years.  In the early 90s Paul helped co-found both the Cascadia Forest Alliance, a local forest protection group, and the sacred Earth Coalition, an indigenous-led group working on sacred sites protection in NW Oregon. He moved to Italy in 1996 where he managed his family’s chestnut farm for 14 years.

Paul came back to Portland in 2012 and soon started doing news and public affairs again at KBOO, taking over Wednesday Talk Radio from Lisa Loving the following year.

Paul speaks with me today about the Waldensians, a religious group that resisted the Roman Catholic hegemony in the 12th and 13th cenuries and prefigured the Protestant Reformation. Paul's ancestry is connected with the Waldensians and he discovered through his research that he shares many of this movement's values even as he does not describe himself as religious. We discuss the significance of our ancestral past as potential resources for activism.

Update Required To play the media you will need to either update your browser to a recent version or update your Flash plugin.
Download audio file
Topic tags:
Activism, Environment/Climate, Faith/Religion/Spirituality, History