White Nationalists and their Agenda Infiltrate the Mainstream 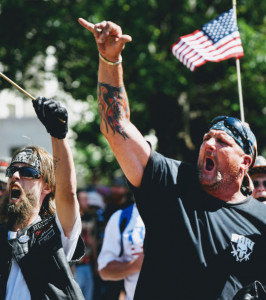 Guest host Linda Olson-Osterlund welcomes the Southern Poverty Law Center's Ryan Lenz to continue the conversation on the rise in hate crimes across the nation.

Ryan Lenz is the Senior Writer for the Southern Poverty Law Center’s Intelligence Project and editor of its Hatewatch blog. Before joining the SPLC in 2010, Lenz was a regional reporter for the Associated Press and an Iraq war correspondent for the wire service from 2005 to 2008. He is a graduate of the Iowa Writers’ Workshop.

The Intelligence Report is the nation's preeminent periodical monitoring the radical right in the U.S.

"As he spoke to the nation on Jan. 20, Donald Trump reminded white nationalists why they had invested so much hope in him as their champion and redeemer.  He painted a bleak picture of America: a nation of crumbling, third-world infrastructure, “rusted-out factories,” leaky borders, inner cities wallowing in poverty, a depleted military and a feckless political class that prospered as the country fell into ruin.  He promised an “America First” policy that would turn it all around. “This American carnage stops right here and stops right now,” Trump declared.  The inaugural address echoed the themes of a campaign that had electrified the white nationalist — or “alt-right” — movement with its promise to stop all Muslim travelers at the border and deport millions of undocumented immigrants – killers and “rapists,” Trump called them.  On Jan. 31, former Klan leader David Duke tweeted: “everything I’ve been talking about for decades is coming true and the ideas I’ve fought for have won.”

Along with an array of conservative billionaires, Trump installed a handful of advisers who are closer to the radical right than to the mainstream. They include:

Bannon, in particular, embodied the hopes and dreams of white nationalists with his blow-it-all-up style and apocalyptic worldview. He thrilled them with his hyper-nationalism, his firebrand attacks on “globalists” and Republican “cucks,” and his stated desire to “deconstruct” the “administrative state.”"