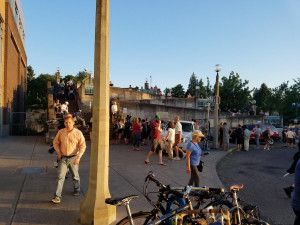 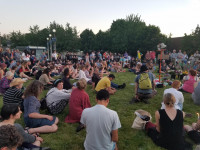 Our complete coverage from Monday, May 29, of the attack which occured at the Hollywood Transit Center on Friday. There were five victims of the attack, which began when a man got on the train and almost immediately began verbally assaulting two teenage girls, one of whom is black and the other wearing a hijab. His words were racist, Islamophobic and threatened violence. The two girls would like privacy at this time and we are not publicizing their names and details. Three men stepped forward to intervene in the verbal assault and were viciously attacked with a knife as the train pulled into the Hollywood Transit Center. Two--23-year-old Taliesin Myrddin Namkai-Meche and 53-year-old Ricky John Best--were killed. 21-year-old Micah Fletcher was seriously wounded but survived, and is currently hospitalized. Fletcher, a poet and social justice activist, is a member of the KBOO community, having been a part of the Hip-Hop Youth Collective.

Our coverage today includes interviews with people showing their respects at the Hollywood Transit Center, Zakir Khan of CAIR Oregon, and with an organizer of a rally this weekend who talks about safety concerns following the attack.