DOING TIME LIKE A SPY: John Kiriakou on Air Cascadia 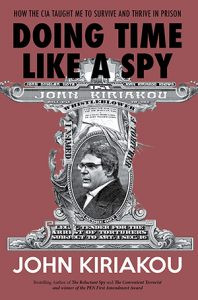 This 30 minute special episode of Air Cascadia features the former CIA analyst and Case Officer who was the first U.S. government official to confirm the use of water boarding on captured Al Qaeda members.  He was also the first CIA Officer to be convicted for passing classified information to a reporter.  John spent two years in a federal prison and used spycraft, including twenty life skills he learned in CIA operational training, to keep himself safe and at the top of the prison social heap.

The CIA awarded Kiriakou with 10 Exceptional Performance Awards, a Sustained Superior performance Award, the Counterterrorism Service Medal, and the State Department's Meritorious Honor Award.   Kiriakou won the 2012 Joe A. Callaway Award for Civic Courage, which is awarded to "national security whistleblowers who stood up for constitutional rights and American values, at great risk to their personal and professional lives". In November 2013, Kiriakou was awarded the "Peacemaker of the Year" by the Peace and Justice Center of Sonoma County.  In December 2013, he received a 2013 Giraffe Hero Commendation, awarded to people who stick their necks out for the common good.  In 2016, he was awarded the Sam Adams Award.  Also in 2016, he was given the prestigious PEN First Amendment Award by the PEN Center USA.   He was awarded the first Blueprint International Whistleblowing Prize for "bravery and integrity in the public interest" by the Australia-based 'Blueprint for Free Speech' think tank in 2017.