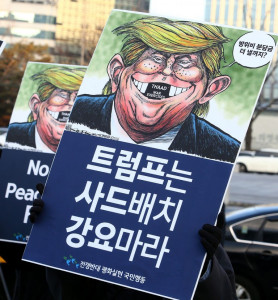 Between the Lines Radio Newsmagazine

"The United States, as I understand it, has made a precondition for talks with North Korea, that they must get rid of their nuclear weapons stockpile before talks can begin. For North Korea, as they view it, that's a nonstarter."

President Trump once again heightened tensions in the Korean peninsula during an interview on April 27 where he stated "there is a chance that we could end up having a major, major conflict with North Korea,” over its nuclear weapons and missile program. But the billionaire reality TV star also said he wanted to peacefully resolve the crisis, while not taking any military option off the table. Just a few days later, however, on May 1, in his now familiar erratic style, the president said he would meet with North Korea’s leader Kim Jong-un, provided the circumstances were right.

Trump’s conditional offer to meet North Korea’s leader came shortly after his nation experienced another failure in the test firing of a missile on April 29, the second such failure since Pyongyang celebrated the 105th birthday of its founder, Kim Il Sung on April 15. Meanwhile, the U.S. has deployed a missile defense system in South Korea, known as THAAD, or Thermal High Altitude Area Defense, designed to shoot down short and medium range missiles launched from North Korea. But both China and the leading presidential candidate running in South Korea’s May 9 election have expressed opposition to the missile system.

Between The Lines’ Scott Harris spoke with Christine Ahn, founder and international coordinator of the group Women Cross DMZ, a global movement of women mobilizing to end the Korean War. Here, she discusses her group's letter calling on President Trump to initiate a regional peace process with North Korea, South Korea and China.