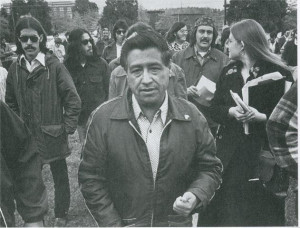 This Friday, 3/31, is the birthday and nationally-recognized holiday (since 2014) to acknowledge UFW founder and farm labor organizing champion, Cesar Chavez.
KBOO will be airing Cesar Chavez and Dolores Huerta speeches from our archives, and from those of sister stations across the country from 5-8pm to celebrate farm laborers and the waves Chavez and UFW made in the labor movement as a whole.
- - - - - - - -
At 5:00pm
From the KBOO archives...
- In May of 1974, Cesar Chavez spoke at Reed College in the midst of a boycott (huelga) of Gallo Wine Company, as well as Oregon-grown grapes and lettuce. At the beginning of the lecture, you'll notice Jose Romero call attention to Reed and Oregon at large for buying "scab lettuce", or lettuce bought in spite of the boycott.
Run time: 57:52
This program was recorded and originally broadcast by KBOO thanks to the efforts of Marlene Smith.
- - - - - - - -
At 6:00pm
From the KBOO archives...
- We bring you another historic speech from Cesar Chavez, recorded at Lewis & Clark College on April 11, 1991 wherein he speaks regarding the farm labor organizing efforts undertaken to ban DDT and other pesticides in the U.S.
Run time: 39:53
This program was recorded and originally broadcast thanks to the efforts of KBOO recording engineer Cheryl Snow.
- - - - - - - -
At 6:40pm
From Los Angeles's KPFK station on the Pocho Hour Power show, we dug up a 2008 interview with Dolores Huerta, legendary labor organizer, who was married to Cesar Chavez. The discussion is around Huerta's endorsement of Hilary Clinton for President in the 2008 primary.
Run time: 13:05
- - - - - - - -
At 6:53pm
A brief clip of Cesar Chavez speaking on behalf of the United Farm Workers in 1966, followed by an even briefer clip of Dolores Huerta taken 1968. Both of these excerpts are available to KBOO courtesy of the Pacifica Radio Archives and the From the Vault series.
Run time: 4:17
- - - - - - - -
At 7:00pm
Dolores Huerta from CCRF's recording from a 2005 luncheon: Huerta speaks about immigrant rights, organizing, international trade, US foreign policy and more.
Run time: 28:51
- - - - - - - -
At 7:30pm