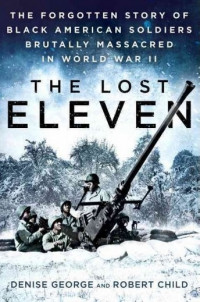 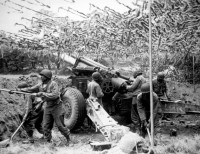 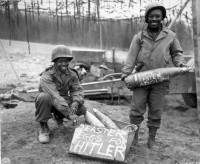 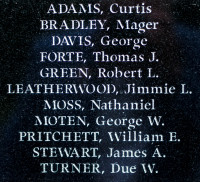 James Dixon talks with co-author Robert Child about the story of the Wereth Eleven. Nearly forgotten by history these African-American soldiers who fought courageously for freedom in World War II only to be ruthlessly executed by Nazi troops during the Battle of the Bulge.

The Lost Eleven by Denise George and Robert Child is the riveting story of eleven African-American soldiers, now known as the Wereth Eleven, who left their homes to join the Allied effort on the front lines of World War II and provided crucial fire support at the siege of Bastogne. Among the few who managed to escape the Nazi’s devastating Ardennes Offensive, they found refuge in the small village of Wereth, Belgium. A farmer and supporter of the Allies took the exhausted and half-starved men into his home. When Nazi authorities learned of their whereabouts, they did not take the soldiers prisoner, but subjected them to torture and execution in a nearby field.
Despite their bravery and sacrifice on the front lines of WWII, these eleven soldiers were omitted from official casualty lists, and for seventy years, their files—marked secret—gathered dust in the National Archive. But in 1994, at the site of their execution in Wereth, Belgium, a memorial was dedicated to the Wereth Eleven and all African-American soldiers who fought in Europe. Since then, annual memorial services have grown larger each year.
Drawing on firsthand interviews with family members and fellow soldiers, The Lost Eleven tells the complete story of these nearly forgotten soldiers, their valor in battle and their tragic end.
The Lost Eleven is based on Robert Child's documentary, The Wereth Eleven, which has aired on the American Heroes Channel (formerly the Military Channel) and the National Geographic Channel, among others. This is the first and only book on these brave soldiers whose tragic, extraordinary story was classified for years after World War II.

“It is because of men like these, who fought for our Nation at a time when, because of their skin color, they were not afforded equal rights, that I could be a retired Army Lieutenant Colonel. My success was enabled by their sacrifices. This book is a must-read and… it blessed my heart.”

“The Lost Eleven is an incredible account of the unheralded patriotism exhibited by African-American GIs during WWII… The story of the Eleven should be a reminder to all Americans that the values of duty, honor and service are not reserved to any one race, class or ethnicity.”

“The personal stories of the African-American soldiers provide a lens through which the reader can gain an understanding of the unique contributions and sacrifices made by African Americans in defense of our Nation. After you’ve read it, pass it on… your friends and family will thank you.”

“The Lost Eleven writes into history the forgotten African-American men who fought courageously in the Battle of the Bulge despite the segregation and racism they experienced… It is a book that should be read by all because it speaks to the human spirit.”