Trump: "You think our country is so innocent?" 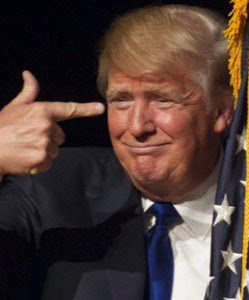 Forty years after the murder of the Congolese independence leader Patrice Lumumba, evidence has emerged in Washington that President Dwight Eisenhower directly ordered the CIA to "eliminate" him.

The evidence comes in a previously unpublished 1975 interview with the minute-taker at an August 1960 White House meeting of Eisenhower and his national security advisers on the Congo crisis.

The minute-taker, Robert Johnson, said in the interview that he vividly recalled the president turning to Allen Dulles, director of the CIA, "in the full hearing of all those in attendance, and saying something to the effect that Lumumba should be eliminated".

Mr Johnson recalled: "There was stunned silence for about 15 seconds and the meeting continued."\

From the New York Times:

Richard M. Nixon always denied it: to David Frost, to historians and to Lyndon B. Johnson, who had the strongest suspicions and the most cause for outrage at his successor’s rumored treachery. To them all, Nixon insisted that he had not sabotaged Johnson’s 1968 peace initiative to bring the war in Vietnam to an early conclusion. “My God. I would never do anything to encourage” South Vietnam “not to come to the table,” Nixon told Johnson, in a conversation captured on the White House taping system.

Now we know Nixon lied. A newfound cache of notes left by H. R. Haldeman, his closest aide, shows that Nixon directed his campaign’s efforts to scuttle the peace talks, which he feared could give his opponent, Vice President Hubert H. Humphrey, an edge in the 1968 election. On Oct. 22, 1968, he ordered Haldeman to “monkey wrench” the initiative.

On this episode of Fight the Empire host Per Fagereng dives into the history of accusations of murder and interference with other country's affairs committed by the U.S. government.  Call in to join the conversation.

Update Required To play the media you will need to either update your browser to a recent version or update your Flash plugin.
Download audio file
Topic tags:
Global Affairs, Government/Politics, History