The Dream Under Siege 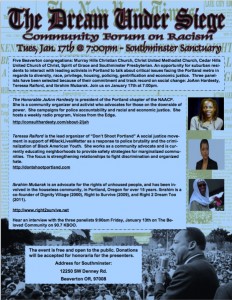 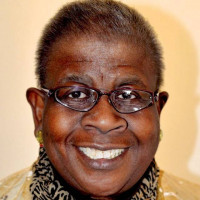 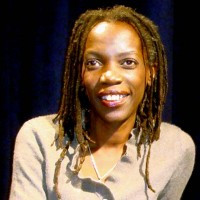 53 years ago, Rev. Dr. Martin Luther King Jr., delivered his famous speech, "I Have A Dream."  What has happened to the dream of a Beloved Community?   Host John Shuck speaks with three activists who have a proven track record on social change about King's dream and how it has been hijacked.

Dr. Catherine Meeks is a retired professor of socio-cultural studies at Wesleyan College. She is the editor of the newly released book, Living Into God's Dream: Dismantling Racism in America.  She serves the Episcopal Diocese of Atlanta as the chari of the Beloved Community: Commission for Dismantling Racism.

The Honorable JoAnn Hardesty is president of the Portland chapter of the NAACP. She is a community organizer and activist who advocates for those on the downside of power. She campaigns for police accountability and racial and economic justice. She hosts a weekly radio program, Voices from the Edge.

Teressa Raiford is the lead organizer of “Don’t Shoot Portland” A social justice movement in support of #BlackLivesMatter as a response to police brutality and the criminalization of Black American Youth.  She works as a community advocate and is currently educating neighborhoods to provide safety strategies for marginalized communities.  The focus is strengthening relationships to fight discrimination and organized hate.

JoAnn Hardesty and Teressa Raiford will join Ibrahim Mubarak of Right to Survive as they lead a panel discussion on racism.  Organizers of the event wanted to create an opportunity for suburban residents to interact with leading activists in Portland to talk about critical issues facing the Portland metro in regards to diversity, race, privilege, housing, policing, gentrification and economic justice.