A Conversation With World Renowned Tattoo And Fine Artist, Zulu 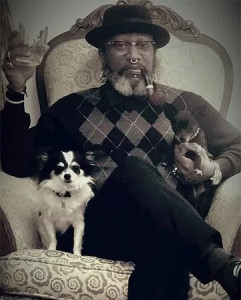 Given that one cannot see those who are on the air, we don't particularly share our experiences of being tattooed. In fact, despite having many tattoos all over, not many people know we have them.  They are all based on very specific journeys in life (most of the art drawn by us), and they became so much a part of us that we've forgotten at times that an external process contributed to their creation.

Then one day, we saw Roni Zulu.  Out of all the masses of media documenting the tattooed community, Zulu was the one who inspired us to give our body art a deeper appreciation.  We have not had any negative experiences regarding being tattooed (we even briefly worked in a shop), but Zulu emphasizing the care and specific techniques needed for those with darker hues inspired us. This may be widely known in the industry, but we had yet to public hear someone speak about it. Though many of us of African descent are tattooed- and despite a growing presence, we still are not particularly publicly represented in high numbers throughout the community. The other thing which spoke to us regarding Zulu was the emphasis on spiritual energy as guiding the process.

Though we have built positive relationships with the people who have placed art on us; and even though we personally look to our tattoos as always having a spiritual component to them, we have never been tattooed at a place which overtly shared those views.  Zulu Tattoo (started/owned by Zulu) is a place which encourages cultivation of these positive relationships, as well as allowing for that sacred experience to occur in the process of being tattooed.  Zulu (who has been credited as "The Godfather of spiritual tattooing") has once said, "My job is never, ever... EVER to put a tattoo on you.  It's to bring the tattoo out of you." Zulu Tattoo specializes in custom art, and the artists focus on researching the histories and customs behind the art, in order to enhance the connection.

Born in Bowling Green, Kentucky and raised in Terre Haute, IN and Sarasota, FL; Zulu moved to Los Angeles after graduating from the Ringling School of Art and Design.  Throughout his experience (as a tattoo as well as an oil and graphite artist) he became inspired not only by the well-known classics of Caravaggio and Dali; he also recognized the importance of Indigenous/Native traditions and the shaping of art, rituals and tattooing.  As an artist he describes his work as “Comprehensive Portraiture”; he states, “I originally intended to be a traditional classical portrait painter but there is so much more to a person than what we physically see unless interpreted with some aspects of surrealism.”  He looks at his work as "a mirror of who we already are and to celebrate and be fascinated with ourselves and the world we live in..."

Zulu Tattoo (originally located in Los Angeles, and currently in Austin, TX) is stated to be "a place where tolerance and creativity thrive. Our goal is to provide you with a unique custom design. We encourage you to get involved in the creation of your design as we work together to bring that which is within you to the surface. Zulu Tattoo has been creating unique and custom designs since 1990."  Each artist at the shop is chosen by Zulu "to represent and embody the integrity and artistic excellence that Zulu Tattoo has become known for."

Update Required To play the media you will need to either update your browser to a recent version or update your Flash plugin.
Topic tags:
Arts/Culture, Education, Faith/Religion/Spirituality
Genre(s):
Jazz, Soul, Spiritual, Rock and Roll