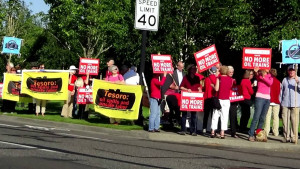 With the election of Donald Trump as the next president of the United States, how do we go forward to protect the Pacific Northwest from the ravages of fossil fuel development?

On this episode of Locus Focus we talk with Dan Serres, Columbia Riverkeeper Conservation Director, about the status of current campaigns to ban fossil fuel infrastructure development in the Portland-Vancouver region as well as the world's largest proposed Methanol refinery in Kalama, Washington. We look at the the power we maintain as a region to hold the line on local fossil fuel development and the Northwest's fortuitous position to block the export of much of the nation's fossil fuels.

Dan Serres started with Columbia Riverkeeper as the lead organizer in a successful campaign to protect the Columbia River Estuary, forests, and farmland from the Bradwood Landing and Oregon LNG Liquefied Natural Gas (LNG) proposals and their related pipelines. Since 2009, he has filled the role of Conservation Director where his work has broadened to protecting the Columbia River from a barrage of dirty fossil fuel export proposals including LNG export terminals, coal export terminals, oil-by-rail facilities, and power plants. Dan is also a member of the Hanford Advisory Board, where he speaks up as a public voice demanding faster and more robust cleanup of North America’s most contaminated nuclear site.