Alexander Maksik on "Shelter in Place" 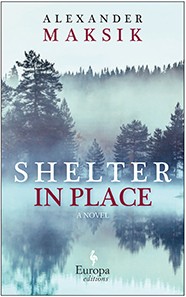 An interview with Alexander Maksik about "Shelter in Place"

Host Kathleen Stephenson interviews Alexander Maksik about his new novel, SHELTER IN PLACE, a story set on the Oregon Coast in the early 1990s.  Joseph March, a twenty-one-year-old working class kid from Seattle, has just graduated from college and his future beckons, unencumbered, limitless, magnificent. Joe’s life implodes when he starts to suffer the symptoms of bipolar disorder, and, not long after, his mother, Anne-Marie March, beats a stranger to death with a hammer.

Alexander Maksik is also the author of three novels: YOU DESERVE NOTHING, A New York Timesbestseller; A MARKER TO MEASURE DRIFT, which was named a New York Times Notable Book and a finalist for both the William Saroyan Prize and Le Prix du Meilleur Livre Étranger. A contributing editor at Condé Nast Traveler, his writing has appeared, or is forthcoming, in Best American Nonrequired Reading, Harper’s, Libération, Tin House, Harvard Review, The New York Times Book Review, The New York Times Magazine, The Atlantic, Salon and Narrative Magazine, among other publications. Maksik is the recipient of a 2015 Pushcart Prize, as well as fellowships from the Truman Capote Literary Trust and The Corporation of Yaddo. He is the co-artistic director of the Can Cab Literary Residence in Catalonia, Spain and his work has been translated into more than a dozen languages.