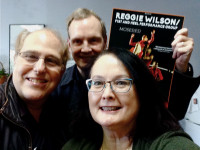 Dmae talks with Walter Jaffe and Paul King founders of White Bird Dance. The two dance producers will talk about White Bird's whole season and the upcoming performances by Reggie Wilson / Fist and Heel Performance Group coming to Portland November 17-19.  We'll talk with Wilson and hear about the origin of his dance company's name.

(Aired Nov. 1st on KBOO 90.7FM or always on stagenstudio.com and iTunes)

White Bird Uncaged presents the Portland debut of Reggie Wilson/Fist and Heel Performance Group, with Reggie Wilson’s critically acclaimed and uplifting Moses(es). Based in Brooklyn, NY, Reggie Wilson is an award-winning choreographer and performer, who draws from the cultures of Africans in the Americas and combines them with post-modern elements and his own movement style to create what he calls “post-African/Neo-Hoodoo Modern Dances.” Moses(es) is a 70-minute work performed by 9 gifted performers, including Wilson, that celebrates, through dance, song and vocalization, the migration of peoples and culture from Africa out into the world.

About the name Fist & Heel: Denied their drums, enslaved Africans in the Americas reinvented their spiritual dance traditions as a soulful art form that white and black authorities dismissed as merely ‘fist and heel worshipping’.

Reggie Wilson/Fist & Heel Performance Group is a Brooklyn-based dance company that investigates the intersections of cultural anthropology and movement practices and believes in the potential of the body as a valid means for knowing. Our performance work is a continued manifestation of the rhythm languages of the body provoked by the spiritual and the mundane traditions of Africa and its Diaspora, including the Blues, Slave and Gospel idioms. The group has received support from major foundations and corporations and has performed at notable venues in the United States and abroad.

END_OF_DOCUMENT_TOKEN_TO_BE_REPLACED

Movin' On
Movin' On